x
Skip to content
Lambeth Together > News > Adults > Catch them while they play: innovative approach to detect and reduce the risk of high blood pressure in Black men in Lambeth

Community partners and the local NHS have teamed up to bring blood pressure checks and health advice into the community, catching dominoes players as they take part in a community tournament.

Lambeth Together partner Black Thrive, in partnership with The Brixton Immortals Dominoes Club, NHS England and general practice staff from Lambeth’s Hills, Brooks, and Dales Primary Care Network, with support from the Ubele Initiative, are running this initiative to support improved detection and management of high blood pressure among Black men. 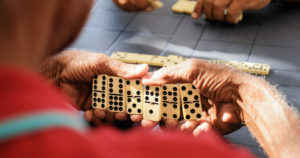 Evidence suggests that efforts to diagnose and reduce risk have a greater success rate when embedded in the community, and so this initiative aims to bring blood pressure monitoring to areas where Black male communities gather, with dominoes clubs chosen as a good place to start this work.  Brixton Immortals Dominoes Club are holding a three-round tournament which started on Saturday 21st May. During the tournament, staff from local GP practices offer attendees blood pressure checks and ask them to answer a short health questionnaire.

Improved detection of high blood pressure could save lives

Some of the initial findings from Saturday 21st May’s tournament:

‘We know that there are high rates of undetected hypertension in Lambeth, especially among Black communities. We can struggle in general practice to get people to come in to get checked, especially as high blood pressure rarely has noticeable symptoms. This type of community event is new ground for us, and I am really encouraged to see how many dominoes players have come forward. It underlines just how important it is for health and care services to work with community groups and to embrace innovation in preventative healthcare. Here, it seems to have worked so far.’

‘The club is a hub for the Windrush Generation and other local people of Caribbean heritage. We know that members of our community have suffered disproportionate health impacts during the Covid-19 crisis, as well as higher than average rates of diabetes and strokes, even before the pandemic. We need to work together as a community to tackle these issues and I’d encourage residents in this higher risks groups to come along, get checked out, and enjoy some world class domino matches.’

The Brixton Immortals Dominoes Tournament still has one more round to complete, on Saturday 11 June, at Brixton Town Hall, from 3.30pm onwards.

The events are open to all and no pre-booking is required.